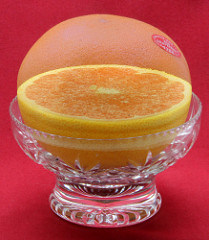 The White Grapefruit in America

Though orange juice is the most popular fruit juice on the planet, grapefruit juice has done surprisingly well in comparably short period of time. In fact, the first concentrated and frozen forms of the juice didn't arrive in the U.S. until the nineteen-nineties. That's more than 70 years after frozen concentrated orange just was introduced!

What was the holdup? In short, farmers have never truly trusted the white grapefruit. It is a fruit that has had more ups and down than a rollercoaster. At its height, grapefruit was one of the most popular fruits in the nation, but when it falls out of fashion…watch out!

America's love/hate love affair with the white grapefruit began in 1823 when the fruit was brought to Florida by way of Jamaica. At the time, farmers thought the grapefruit would appeal to a population that had a taste for citrus fruits (The orange had come to Florida in the 16th century.) They were wrong! Most people couldn't stand the taste. They said it was too sour. Of course, this was before sugar or artificial sweetners were readily available.

Decades later, the grapefruit found its way to South Texas where it received a similarly chilly reception. In fact, the only thing that saved the grapefruit in America was an accident of nature. That's right! A simple mutation altered the fate of the fruit in the States and in the world.

What happened to the white grapefruit? By 1962, Texas decided that they no longer wanted to grow them. But that was okay, since by that time Florida, California and Arizona had huge crops of white grapefruit. In fact, Florida had overtaken Texas about a decade earlier and they were shipping about three times as many white grapefruits as Texas shipped red ones.